Joan Pawsey Shoucair - An English Woman in the 20th Century Vortex of Change....Part 6

A Visit by the Prince of Wales....

Below in 2013, Joan Shoucair, left in the picture, shared refreshments in the English Cotswolds with two American friends, Barbara Holliman and Russell Hoover of  Pennsylvania.  While visiting Joan told us of an amazing visit to Uganda in her childhood by the Prince of Wales, the future Edward VIII of the United Kingdom. 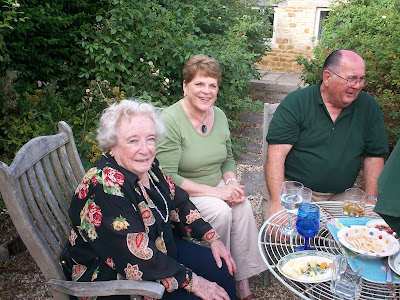 The time was October 1928, and the 34 year old prince was touring, yet once again, the colonies and protectorates of the world-wide British Empire.

Joan, age 7, and her mother, Elsie W. Newton Pawsey, had moved to Uganda to join Joan's father, Henry 'Bert' Pawsey, a businessman, just the year before.

Below, a newspaper clipping on the visit. 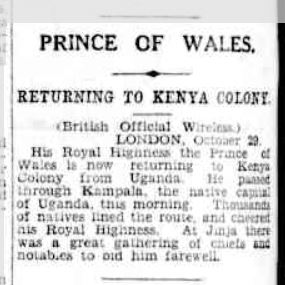 In Joan's numerous scrapbooks and photograph albums, she has saved from her parents, are two striking pictures of the Prince of Wales taken during the visit to Kampala.  Joan believes they were snapped by her Mother and never before have been published.

If not, they are amazing find, and with Joan's permission, we post them.  Joan reserves all rights to the use of the photographs. Below is His Royal Highness standing next to the Rolls Royce that was used as his mode of transportation while in Kampala. 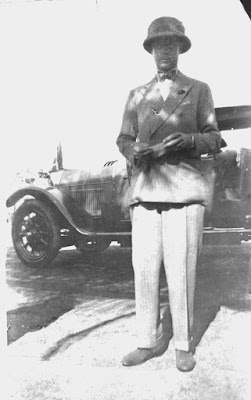 Below is an action photograph of the Prince, closest to the camera, striding rapidly, possibly at Makerere College, a school of higher education he inspected during his time in Kampala. 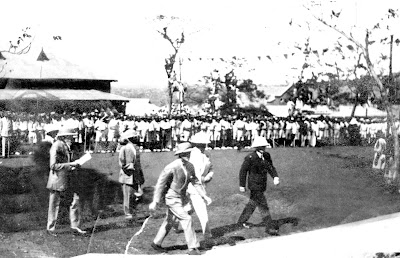 On the back of the picture, Elsie has identified the persons in the photograph.  They are the Prince of Wales, Colonel Harvey, Sir William F. Gowers - Governor of Uganda (1925-1932), General Trotter and Sir Henry Shiffair?, ADC to the Governor.

Of course, this Prince of Wales is known best for abdicating the throne in 1936 in order to marry an American, the twice-divorced, Wallace Simpson.  Edward VIII (1894-1972) is the uncle of the current monarch, Elizabeth II.

Next posting, more on the rich, full life of Joan Pawsey Shoucair....
Posted by Glenn N. Holliman at 9:04 AM No comments:

Joan Pawsey Shoucair - An English Woman in the 20th Century Vortex of Change....Part 5

Below, Christmas Day 2013 in UpperOddington, Gloustershire, England, Joan Shoucair, right, celebrates the holiday with friend, Barbara Holliman, left, of Pennsylvania, U.S.A., this writer's wife. One of the riches of Joan's long life is the ability to continue to develop friendships as the years pass. The Hollimans and Joan met on a river cruise in 2012. 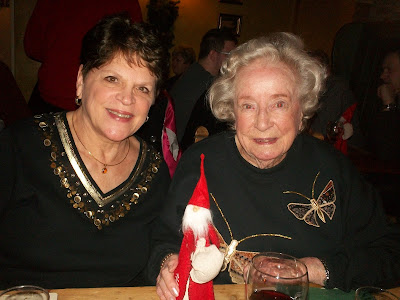 Our continuing story of Joan's fascinating life picks up in the summer of 1927, when she and her mother, Elsie Pawsey, arrived in Uganda where her father, Henry 'Bert' Pawsey, had taken employment for a fruit company.

During the European 'Great Scramble' for African colonies in the second half of the 19th Century, U.K. business interests had begun to interact with various indigenous tribal units in the interior of the great continent, south of Sudan, in an area soon known as Uganda.  The country takes its name from the Buganda kingdom, which encompasses the southern portion of the county.  Ruled as a British protectorate, Uganda gained its independence in October 1962.

Below, circa 1930, 'Bert' Pawsey stands in front of the family home in Kampala, Uganda.  Note he is wearing a business suit with a sun helmet perched on his head.  As Noel Coward wrote in his song, only 'mad dogs and Englishmen go out in the mid day sun'!  The Equator runs through Uganda. 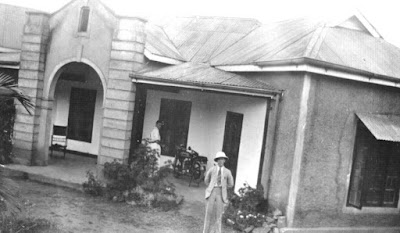 The interior of their Kampala home with its comfortable arm chairs and numerous flowers could have been in England.  The small plush armchair in the background was little Joan's. 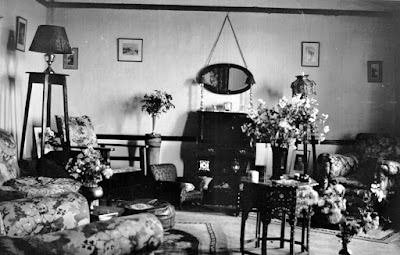 Below, in the front of their home, was an expansive lawn and fields overlooking in the distance the magnificent Lake Victoria. 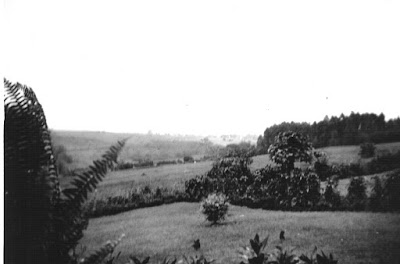 Next more photographs and biography of the fascinating life of Joan Shoucair....

Posted by Glenn N. Holliman at 8:07 AM No comments:

Joan Pawsey Shoucair - An English Woman in the 20th Century Vortex of Change....Part 4

She was just five years old in July 1927 when with her mother, Elsie Ward Pawsey, Joan left England and moved to her new home in Uganda.  Her father, Henry 'Herb' Pawsey, former salesman for the famous John Lewis department store in Liverpool, took a position with Mengo Planters in Kampalo, Uganda.

Mangos were and are still a major export of  Uganda and Kenya. The sweet taste and nutritional value of this breadfruit makes it a popular food throughout the world.

The journey by sea was from London, England to Mombassa, Kenya, a British colony at the time.  In addition to her mother, her one year old cousin, Terence Francis Sheldrake, accompanied them.  As with her father, Terence's parents, Bert's sister and brother-in-law, had traveled ahead also to establish a new home and occupation.  During the month at sea, the children were closely looked after by Lahsa stewards and spoiled quite a bit. The stewards of Arab descent were believed to be from the island of Luma off the coast of Kenya. 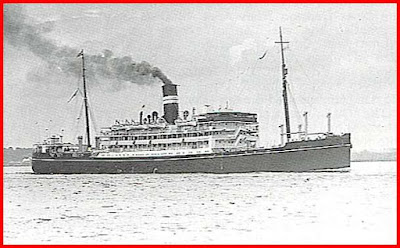 The ship was the Modasa, a P and O passenger liner launched in 1921 of 9,000 tons.  During its life time, it served mainly on the East Africa and India sea lanes.  The Prince of Wales on his journey to East Africa in 1928 sailed on the Modasa.  After service in World War II, the ship was scrapped in 1954.

After docking in Mombasa, Kenya, Joan's family traveled most of the way by train, the Kenya and Uganda Railroad, for the two and a half day journey to Kampala, Uganda.  The railroad began construction in 1895 in order to provide 20th Century transportation to the heart of East Africa.  Although traveling in luxury, Joan remembers walking beside the under powered train as it climbed slowly up the Kenya Escarpment.
Below, a photograph from the current Riff Valley Railroad, the inheriting company of the original Uganda Railroad.

The Kenya-Uganda Railroad which began construction in the middle 1890s was not finished until 1931, when it extended to Kampala.  The line was built by the Imperial East Africa Company which administered the territories of Kenya and Uganda until 1920.  That year, the British government took over Kenya as a colony and Uganda as a Protectorate.

Next more life in Uganda....

Posted by Glenn N. Holliman at 7:51 AM No comments:

Joan Pawsey Shoucair - An English Woman in the 20th Century Vortex of Change....Part 3


We continue our series on the fascinating life of Joan Shoucair whose father was a colonial administrator in the Uganda Protectorate, and whose husband was a published photographer in post World War II Egypt.  Below, on her 92nd birthday, Joan shares memorabilia and pictures with the writer of this blog.  This photograph was taken in Upper Slaughter, Gloucestershire, U.K., Boxing Day 2013. 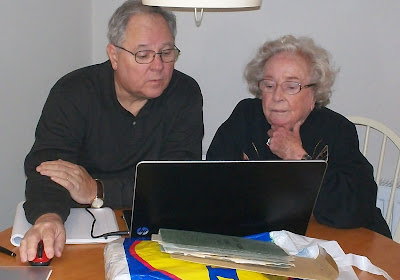 In an earlier article, we looked at the World War I experiences of Joan's father, Henry Herbert Pawsey, who entered the Great War as a private and emerged an officer.  Undoubtedly his gifts for administration and leadership emerged during the stress and destruction of the war in which so many of his contemporaries perished.

In 1919, Henry married Elsie Ward Newton ( the engagement picture of the couple below). After further service in France in 1919, he was discharged in 1920. 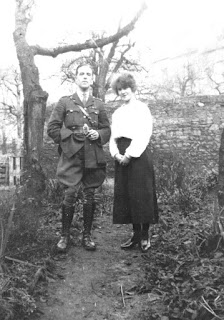 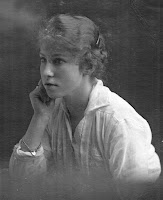 He took his young bride to his new civilian occupation as a salesman for the famous Liverpool, England department store, John Lewis (pictured below).  In Liverpool on 26 December 1921, their first and only child, Joan, was born. 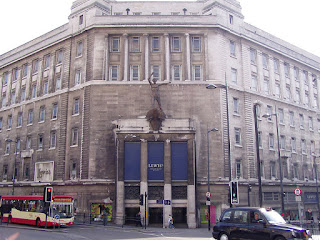 Undoubtedly,  looking for economic advancement, in 1926 Henry accepted a position with the Mengo Planters, Ltd, and was posted with this corporation to Uganda, a British Protectorate in East Africa. He would serve with this company and Uganda Stores in Kampala, the capitol, until 1940 when he joined British Colonial Service.

Passengers records indicate Henry "Bert" sailed September 1926 on the German ship, Wangoni, without this family, who would follow later.  The port city was Mombasa, Kenya.  From Mombasa, Henry would have taken the train to Kampala, Uganda on the shore of Lake Victoria. 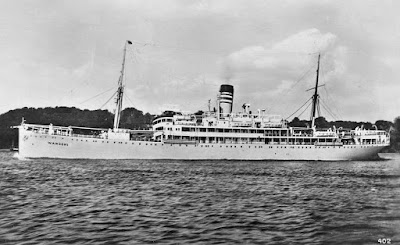 The Wangoni was launched in 1921, 7,700 tons, by the Woemann Company, a German shipping firm from 1881 to 1941 that specialized in the African trade.  The German Navy requisitioned the Wangonia in World War II, and the ship finished her life as the USSR ship the Chukatka.

Next posting, Joan and Elsie join 'Bert' in Uganda....

Posted by Glenn N. Holliman at 6:30 PM No comments: